The Political Economy of Sovereign Debt

How creditors came to wield unprecedented power over heavily indebted countries—and the dangers this poses to democracy. 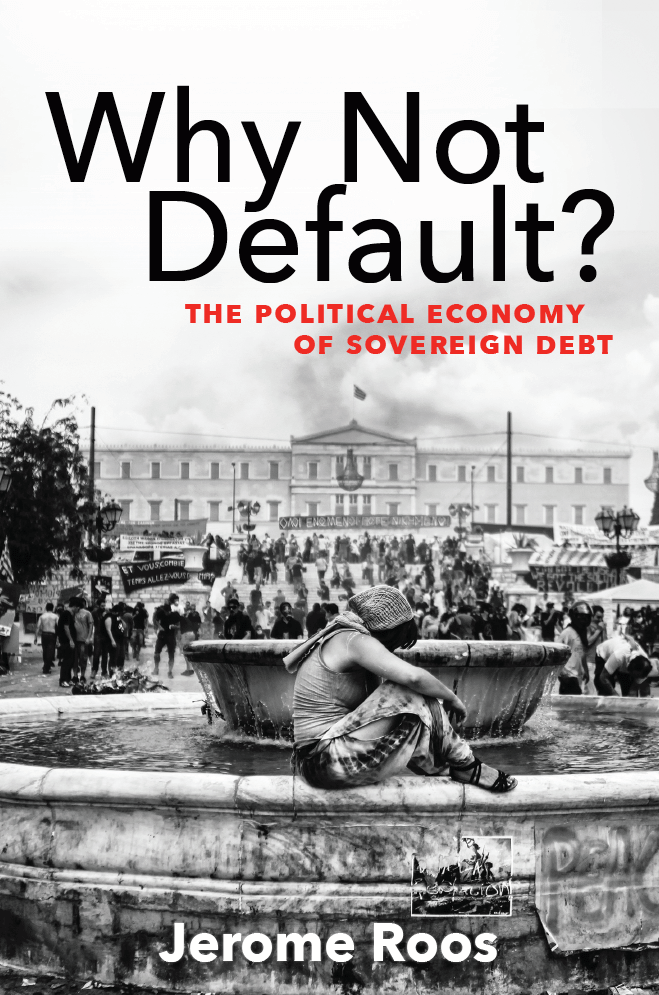 The European debt crisis has rekindled long-standing debates about the power of finance and the fraught relationship between capitalism and democracy in a globalized world. Why Not Default? unravels a striking puzzle at the heart of these debates—why, despite frequent crises and the immense costs of repayment, do so many heavily indebted countries continue to service their international debts?

In this compelling and incisive book, Jerome Roos provides a sweeping investigation of the political economy of sovereign debt and international crisis management. He takes readers from the rise of public borrowing in the Italian city-states to the gunboat diplomacy of the imperialist era and the wave of sovereign defaults during the Great Depression. He vividly describes the debt crises of developing countries in the 1980s and 1990s and sheds new light on the recent turmoil inside the Eurozone—including the dramatic capitulation of Greece’s short-lived anti-austerity government to its European creditors in 2015.

Drawing on in-depth case studies of contemporary debt crises in Mexico, Argentina, and Greece, Why Not Default? paints a disconcerting picture of the ascendancy of global finance. This important book shows how the profound transformation of the capitalist world economy over the past four decades has endowed private and official creditors with unprecedented structural power over heavily indebted borrowers, enabling them to impose painful austerity measures and enforce uninterrupted debt service during times of crisis—with devastating social consequences and far-reaching implications for democracy.

PART I. THE THEORY OF SOVEREIGN DEBT

Chapter 5. The Making of the Indebted State
Chapter 6. The Internationalization of Finance
Chapter 7. From Great Depression to Financial Repression

Chapter 8. Syndicated Lending and the Creditors’ Cartel
Chapter 9. The IMF’s “Triumphant Return” in the 1980s
Chapter 10. The Rise of the Bankers’ Alliance
Chapter 11. “The Rich Got the Loans, the Poor Got the Debts”

Chapter 12. The Exception That Proves the Rule
Chapter 13. From IMF Poster Child to Wayward Student
Chapter 14. The Rise and Fall of the Patria Financiera
Chapter 15. “Even in a Default There Is Money to Be Made”

Chapter 16. The Power of Finance in the Eurozone
Chapter 17. Anatomy of a “Holding Operation”
Chapter 18. The Establishment Digs In
Chapter 19. The Socialization of Greece’s Debt
Chapter 20. The Defeat of the Athens Spring

Conclusion: Shaking Off the Burden

A fascinating and timely book! Gives us a whole new perspective on the global debt crises since the 1980s.

Advance praise for Why Not Default?

This is an outstanding book. Jerome Roos demonstrates how the structural power of creditors has grown, enabling them to impose demands on countries regardless of political system, partisan composition, or the nuances of different interest groups.

This is a fascinating and timely book! It gives us a whole new perspective on the global debt crises since the 1980s. To understand why countries grind through under duress and the power of finance, we need to understand why struggling borrowers don’t give up. Why do have-less countries continue to borrow despite the massive transfers to have-more countries and investors? This book offers brilliant insights.

Why Not Default? is a must-read for all those wishing to truly understand the current challenges to democracy and social justice. In this meticulously and thoroughly researched book, Roos shows how the transformation in the global economy has resulted in the reconfiguration of both international and domestic power relations, producing a formidable set of incentives and constraints that compel nations to repay their debts even when the social costs are unbearably high.

Judith A. Teichman, University of Toronto

In this engaging book, Jerome Roos hones in on three mechanisms that militate against sovereign default: market discipline, policy conditionality, and national elites within the debtor country. The 1-2-3 punch of international banks, multilateral institutions, and domestic capitalists overwhelms tendencies to default, which is why default is such a rare event in the contemporary world. This book is an important contribution to understanding structural power in the international political economy.

The four decades since the breakdown of the Bretton Woods order (early 1970s) have seen a frequency of foreign debt crises at least twice as high as in the decades before 1914—yet with hardly any sovereign debt defaults, while such defaults were almost normal through the nineteenth century up to the 1930s. Why this dramatic change? Jerome Roos provides us with surprising answers, which explain why foreign investors in the contemporary era have been so confident of repayment despite the lack of effective legal enforcement mechanisms on indebted governments. As he does so, he breathes fresh understanding into the whole field of the political economy of international finance.

"[A] powerful and provocative argument."

"[An] impressive work ... [Makes] valuable contributions to the study of sovereign default that should inform future research for years to come."

"[A] fascinating … cri de coeur against the prevailing order [that will] upend a lot of conventional wisdom ... [S]uperb, original and thoroughly researched."

"[A] timely and thoroughly researched book—destined to become an obligatory reference in the field."

The Journal of Economic History

"A fantastic contribution to the growing literature on sovereign debt ... [This] will be a mandatory reference for scholars working on financialization, debt and structural power."

"[A] fresh and painstakingly researched approach that raises vital questions for economists, political scientists and policymakers."

"[D]oes a great service ... by synthesizing a huge amount of detailed information about these crises in one place."

"[E]xcels in the persuasiveness of its theoretical apparatus and its great clarity."

"[D]econstructs the mechanisms put in place for over forty years to prevent any cancellation of debts, making people pay the price and saving private financial interests."

"[A] book that is doing the rounds in official circles [in Argentina]."

"[A] book of economic history that is passing through the most powerful offices of the Casa Rosada like a ghost ... A bestseller among the most important officials."

"[A] work that was carefully read in the government palace to evaluate the costs of a possible suspension of payments."

"[I've] been reading Why Not Default? at an excruciating pace for the best reason: every page or so I get inspired by some subtheme or footnote and go off chasing it down."